Home » #79: Organic signals and the paradox of overengineering

I drink plenty of water because I naturally crave it. I often wonder after a refreshing drink whether plants feel the same way after getting watered: nourished from within. And then I wonder why, despite my affinity for water, I too sometimes fall into a pattern of forgetting and getting dehydrated.

I read somewhere that we can mix up our thirst and hunger signals. When I first read this, I thought “hum, interesting, that’s never happened to me”. But now that I’m cultivating a capacity to observe, I see it happens quite frequently. The common thread in these moments is that I’ve lost my connection to thirst signals because of busyness or distraction (likely missed or overrode initial signals). When I haven’t had adequate water in several days, it feels harder and harder to trace my way back to that faint signal. Then drinking water becomes a task; another thing to track and remember, and not something I do naturally.

I notice parallels with a number of other habits including meditation, writing, movement, sleep, and human connection…essentially anything that feels lifegiving. When I lose that organic signal from within because of modernity’s squeeze, there is pressure to start tracking the when, the how and, the how much. There is pressure to engineer the optimal routine. But once designed, it all backfires. Rather than following that engineered routine, part of me stops wanting to do something that comes so naturally to me.

There seems to be an experiential difference between leaning into the organic nurture of a practice and over-monitoring it for output. For me atleast, one seems to release the creative expansion of the practice and the other somehow robs it. One makes the habit magnetic and the other a bit repellant. It feels as if my psyche is saying: “Give me the tools to make healthful choices, but set me free to interact in those lifegiving pockets without a script.”

I want to build evolving gardens and not static skyscrapers.

“When I refer to ‘creative living,’ I am speaking more broadly. I’m talking about living a life that is driven more strongly by curiosity than by fear.” ― Elizabeth Gilbert, journalist and author 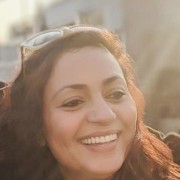